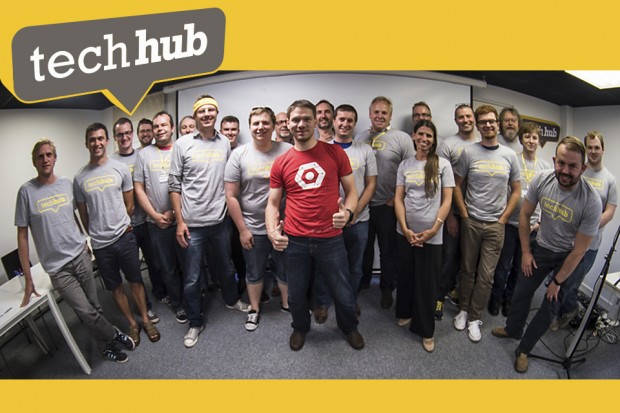 Have you ever wondered what can be achieved in an 8 hour working day?  When IT programmers get together and start ‘racing’ against each other?  What would a web app look like that lets you understand your area’s road safety better? For the answers take a look at http://www.roadsafecheck.co.uk/ . This app was created and developed in the space of just 8 hours to show 2014’s road traffic incidents in your area at the event. For anyone not familiar with the term, a hackathon is a coming together of the words ‘hack’ and ‘marathon’ to signify a race of exploratory computer programming.

We were the winning team made up of Fujitsu and DVLA IT experts. How did we win? Through simple, open collaboration across all aspects of a start to finish project.

After a brainstorming session with a number of other colleagues, we had various ideas on the table, what real value each idea could give and, ultimately, what could realistically be achieved within the timescales involved.  We chose the best 3 ideas, split off into 3 teams and set to work. Most of the teams called it an early night as the following day was going to be a long and intense day.  However, our team stuck at it until gone midnight, which - little did we know - had given us the advantage.  This was all within the rules and as Thomas Edison once said “Genius is one percent inspiration, ninety-nine percent perspiration.”

Come the next day, although a little tired, we were well prepared for the endurance event and all believed in combining our abilities to win. It was the approach of understanding each team member’s abilities, getting everyone working to their strengths whilst at the same time mitigating their weaknesses, and working in an open and honest fashion, which moved us very quickly from a forming team to a performing team.

The competition had restarted at 7am, and come 4pm all work was going to have to stop for the judging to begin. Without a second to lose, we quickly divided up the tasks and, through sitting together with the very familiar “wall of tasks” close by we started to eat our way through the post-it notes. Were there many problems in this fast start to finish project? No, and why was this?  Well, no strict processes, no documentation, no contract and no strict plan gave us the flexibility to build value quickly and produce working software ready for customer review.

One area in which we were challenged was how to make our project fit within the Google Cloud Platform - which was one of the judging criteria - and make it stand out.  In the end we could only use a small element of the Google platform with the time we had, we did almost everything else with a bit of Google magic. My presentation wouldn’t have looked half as good without referring to how it all began ie a Google search. So just after lunch time I was testing our web app with some independent people, gaining feedback and understanding how it could be improved then and in the future. This allowed us to refine the web app, build the final presentation and be confident we were onto something. Working up to the wire,  we were ready.

The web app was presented as giving the public data from which they could make their own decisions. That could be making a judgement as to how safe the roads are in an area, where to watch out when driving or which routes to be wary of when out on the roads. The business potential of the web app was also highlighted, as it could be improved to link up with local data like noise levels, crime etc, or include the ability to analyse driver data in more detail which could help with insurance industry charging models or focused driver ability improvement programmes. As presentations went we weren’t certain of our standing - every team came across really well. The judges didn’t mention us during their summing up – this made us wonder if we were out of the running. When they announced we’d won we were amazed. It was a good day and we were glad to have been given the opportunity to collaborate together.